We want to hear from you!
Email Letters to the Editor to:   editor@themeafordindependent.ca
All letters must include the author's full name, address and telephone number for verification purposes.
Only your name and the city/town where you live will be published.

Opinions expressed in letters to the editor are those of the letter authors and not of The Meaford Independent.

At the risk of possibly being mistaken for Yogi Berra, I have to say It's like déjà vu all over again!

The Pumped Storage Plant debate feels like a bad tennis match to me. Mr. Mikkelsen answers your readers' concerns with facts, science, engineering, and common sense, after which a resident or two manufactures another list of perceived grievances for him to tackle. Seriously? Give me an example of a facility of this kind on an active military base? What if you bury the pumps - but I can still hear them? I'll leave those ones and the rest of the science for Mr. Mikkelsen to tackle. I'd like to raise a different concern that I don't feel has been addressed, or if it has I certainly missed it.

My wife and I lived for 24 years in a lovely Etobicoke neighbourhood immediately south of Lester B. Pearson International Airport. About once every year or so, someone new would move into the neighbourhood, only to discover to their complete horror and shock that there was a large international airport immediately to the north of their new home. And that planes land at airports. And they land and take off north to south on weekends when they're maintaining the east to west runways. Planes that are both large and noisy. They would try to galvanize the Homeowners Association into action to restrict even further the hours allowed for take offs and landings, and reduce permissible noise levels. If I was asked to join in the campaign I usually informed them as politely as I could that that airport had been there since my boyhood. I was well aware of it when we bought our home, and that airplanes can be noisy when taking off and landing. But if they felt their real estate professional or lawyer hid its existence from them, maybe they had an action against them? But my advice was always to leave Pearson out of any regret they may have over their purchase decision.

Who cares, you are probably asking yourself? Well, I'm suffering from déjà vu.

I have been coming to Meaford for 63 years. My entire life. My wife and I have owned our own waterfront cottage here for the last 28 of those years.(Coincidentally, when we told the neighbour two doors down from us in Etobicoke that we went to Meaford every summer she told us that her family lost their land for the creation of the Meaford Tank Range during the Second World War, but that she could still call the Base and arrange a visit to her family grave sites that weren't moved at the time.) The Tank Range has been there my whole life. DND has had exclusive use of that land as long as I have been alive. Yet, now I seem to be living in a location where people seem surprised somehow that when the Armed Forces train people it involves things that either get fired out of a rifle or machine gun, blown up by demolition specialists, or fired by long guns, sometimes tanks. And are worried they will hear it. And now, even worse, that the Armed Forces may choose to do other valuable things with the land that has been theirs to use exclusively. Since 1942.

Unless someone bought their home or cottage in Meaford just prior to the start of WWII they can't possibly pretend that they didn't know The Range was there. That the Armed Forces train there. School kids know that when the Army trains, things go 'Boom'. A lot. If you think that your real estate professional, your lawyer, Google Maps, and the Department of National Defence conspired to hide The Range from you when you were making your purchase, you may have a cause of action against your realtor, lawyer, maybe even Google. But leave the DND out of it. Whether you approach it from the land or by sea, you'll be met by clear signs that warn prospective purchasers (and remind residents) that they are there. Some of the signs on the fence might even be readable from the living room or kitchen windows on Cedar Avenue. If you've never been there, they say something to the general effect of "Property of the DND. Trespassers may be blown up."

I personally don't believe the Pump Station project will proceed. When DND compares the additional cost of the lost use for training to the benefits obtained, I'm guessing they'll go "Nope". But I somehow doubt they'll be moved by the complaints of someone who moved to within 0.67km of an existing active military training facility and would now like to dictate how it can be used. 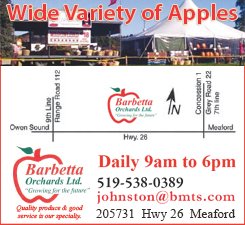