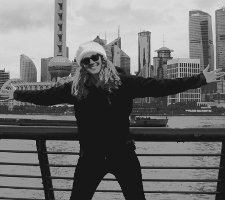 After graduating university my best friend Corey and I decided to go to Hawaii as a graduation present to ourselves, from ourselves. We spent weeks scouring the internet, meticulously planning our month-long backpacking adventure throughout the islands of Oahu and Maui, and searching for the cheapest hostels, excursions, and adventure tours that we could find.

We were looking forward to doing everything we had planned, but particularly shark cage diving. I had been terrified of sharks since I was four years old when I accidentally saw JAWS while being babysat, and Corey had been terrified of fish in general for his entire life, so shark cage diving was going to be exhilarating, horrifying, and a fear-conquering adventure for the both of us.

We had decided to go with North Shore Shark Adventures for many reasons, one of them being because it was the cheapest tour. Now, most people wouldn’t put the words ‘cheapest’ and ‘shark cage diving’ in the same sentence, but North Shore Shark Adventures had been featured on BBC Outdoors, ESPN Outdoors, Canadian Wildlife Television, Wheel of Fortune and The Travel Channel, so we felt confident in choosing them.

Joe, the captain and owner, picked us up from our hostel in Waikiki and drove us and the newly engaged British couple in our group through the beautiful interior of Oahu to Haleiwa in the North Shore. Once on the boat, we travelled about three or four miles offshore and through some questionable waves. Thankfully no one was seasick, but we overheard Joe say to another guide that our group might be the only one running that day because of how choppy the water was. He then went on to tell us that on a calm, sunny day the visibility was so clear that you would be able to see 150 feet or more down and sometimes the sharks coming up from the deep. Joe added that where we were going to anchor and drop the cage was for years where crab vessels discarded any of their waste, so the motors of the boats had become a dinner bell for the sharks.

“But you do have actual food for them, right? Like, it’s not us. Right?” I asked.

Joe smiled and pointed to a few buckets of chum, a not very appetizing concoction of fish and entrails they would heave over the side of the boat for the sharks.

After we were fitted in our snorkel gear, Corey and I offered to go second in the shark cage, allowing the newly engaged couple to go first.

“Of course you would do that, you guys are Canadian! You’re so polite!” The Hawaiians and the British laughed. 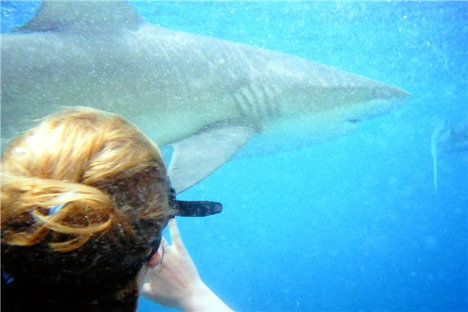 Corey and I smiled and nodded, pretending that was the reason, but secretly knowing it was just that we wanted to make sure the sharks were well fed before we got in the water with them. That being said, going second did have other advantages because we got to see firsthand how everything worked from the security of the boat. For example, how to properly get into the cage (Joe and his helpers brought the cage up snug to the side of the boat and with your snorkel gear on you were able to slide into it), how far the cage was from the boat (the shark cage was connected to the boat with a wire line and floated several feet off the back), and if a shark could accidentally get inside the cage while we were in it (no shark would be able to accidentally get inside because the cage extended almost a foot above the surface of the water.) Two of the walls of the cage were bars, while the other two were thick plexiglass, leading to the illusion that there was nothing between you and the sharks.

I think the scariest part for me was seeing the first dorsal fin pop out of the water before we were even in it, so when it came our turn to get into the cage I was riding on pure adrenaline! That’s not to say that when the first ten-foot shark swam past me my heart didn’t skip a beat, because it definitely did, but it wasn’t from fear as I had anticipated, it was from excitement! The reality of how surreal it was, being in a shark cage, in the Pacific Ocean, and off the coast of Hawaii wiped away anything other than genuine elation – even if Corey and I were getting tossed around like a couple of balls in a pinball machine from the rough waters! We had bought an underwater camera and within minutes of being inside the cage we had taken the allotted amount of photos, which in the end was a good thing because then we didn’t have to worry about accidentally dropping the camera through the bottom rails of the cage. We were inside the cage for twenty minutes and I couldn’t stop smiling the entire time, resulting in me swallowing a lot of salt water in the process, but I didn’t care because I was in absolute awe staring at the eight Galapagos sharks that were swimming around us. 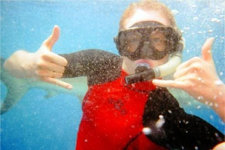 Going shark cage diving, seeing sharks in their natural habitat, and hearing Joe and his team of experts talk about them really showed me how truly misjudged they are. They’re not the crazed maneaters constantly on the prowl for humans as a lot of movies and news stories portray, but rather beautiful, graceful and interesting creatures. Swimming with sharks is one of the coolest things that I have ever done and I would highly recommend it to everyone and anyone.