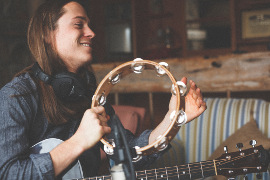 Jayden Grahlman, a young local talent familiar to anyone who checks out the open stages, or catches live music in area venues, has a crowd-finding campaign in place to help him create a new album to be called Diving In. He is well on his way, with most of the bed tracks completed, working with producer Craig Smith.

“He’s got amazing ears and he really knows what he’s doing,” Jayden enthuses. “He’s super easy to get along with and he has great ideas, and he really brings the best out of whatever we’re doing.”

Jayden will be benefiting from the help of several musical friends to make the album a reality.

“There’s going to be some great people playing on it,” he says. “We’re just getting the core tracks done on their own and then we’re going to have people come in on their own once everything’s totally ready.” Not everyone has been lined up yet, but he mentioned that Tyler Yarema is “going to come and play piano on some tunes,” and he will be heading to Guelph at the end of March to add drums and bass with Adam Bowman and Tyler Wagler respectively.

“It’s something that’s been a long time coming for me and I’m having a lot of fun in the studio,” he says.

Jayden has guitar skills that put him in the top echelon of local players, something that developed from a passion he discovered at a young age.

“The first time I remember actually learning guitar and playing stuff was me and my brother. I think I was twelve and he was thirteen and something like that and we had a contest to see who could play the most riffs. It was like, ‘Smoke On The Water’ and ‘Seven Nation Army’, and whatever many little riffs you could learn. So I just learned a whole whack of them and at that point I just got into it. I was like, ‘Oh! I can learn songs!’ It was just fun so at that point I started playing more.”

At first he resisted his mother’s suggestions to take formal lessons. He picked up what he could on his own and from local players like Trevor Mackenzie and Bill McMillan.

“Then eventually I got to the point where I just thought lessons would give me a little bit more to think about,” he says, “and even if I was still learning on my own lessons would help me do that. So I took lessons for a year or so at Fromager Music in Owen Sound.

“I just kind of accelerated really fast with what my teacher was teaching me. I kind of just picked up on it all and understood it and started using it. And then within the next year I was teaching at that store because I built a good relationship with my teacher and he thought I could offer something good to other people.”

He started that job just as he was beginning high school, “and then I got to teach guitar through high school, which was my job, which was awesome, like the best job you could really ask for.”

He also started playing in bands while in high school. “I had some friends in high school who were all great musicians so we started a band and I think I was just in bands always after that. I don’t know if there was ever a time when I was not in one.”

With his wide-ranging interests, he has added his talents to a lot of bands, more recently including Higher Funktion, where he provides funky guitar riffs to augment a seriously impressive horn section backing powerhouse singer Randy Martin, and The Honey Brothers, where he’s teamed up with Jay D. Stiles and Drew McIvor. He’s put his work with bands on a temporary hold while he works through this studio project, having already booked a release party at Heartwood Hall in Owen Sound for June 28.

Times have changed for aspiring recording artists. The old paradigm has disappeared. The route to success used to be to interest a talent scout from a major label and once they signed an artist they would invest in both the studio time and promotion to build a career. Those days are gone and now establishing a following has become a self-employment effort. It’s necessary for the artist to provide his own financing.

And while the Internet, with streaming and downloading, was largely responsible for that lost opportunity, it has also created opportunities of its own, including direct access to an audience through sites like CD Baby, and crowdfunding sites like indiegogo.com, which is the vehicle that Jayden is using.

These sites ask fans to donate to the cause and, like public television fund drives, they can offer a variety of incentives. On Jayden’s site, the incentives include digital or CD copies of the album when it’s completed, a limited edition poster (something that in Jayden’s case may well be a collectors’ item a few decades from now), a couple of music lessons (he teaches ukulele, guitar, and bass), and the option to have him record your favourite song on YouTube, dedicated to you.

It doesn’t stop there. He’s also going to be performing a fundraiser concert at the Thornbury library on March 22.

To check out his funding site, including some video, go to https://www.indiegogo.com/projects/diving-in-jayden-grahlman-hiphop#/

They say it takes a village to raise a child, and in this case it takes a community to launch a talent. So far he’s about a third of the way to his fundraising goal with a month left.