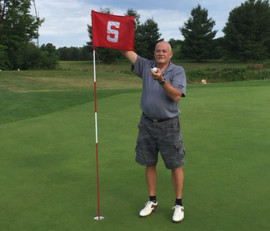 On Tuesday July 12th The Meaford Senior Men's Golf League played their regular weekly game at the Meaford Golf and Country Club.  It was a warm morning, the air heavy with summer humidity.

Local golfer, Graham Shaw, was preparing to hit his tee shot on the 5th hole of Randal Run.  Number 5 is a 176 yard par 3 which has a creek running diagonally across the fairway.  The green is has water on two sides with a large sand bunker guarding a third side.

Shaw, who has been playing golf for over 55 years, took his driver from the bag and strode confidently to the tee box.  After teeing up his ball he took his usual smooth swing, landing the ball just in front of the green where it rolled up to and into the cup.

Shaw's eyesight is not what it used to be, so was not able to see the ball go into the cup, but his playing partners, Ernie Leonetti, Bill Goldsmith, and Dan White, were all able to witness this rare feat of golfing skill.