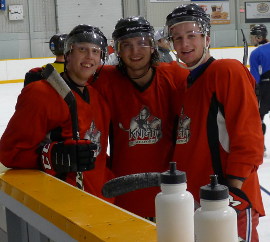 The hockey world can be rough and tumble, but champions are built by forging ahead through adversity, and the Knights of Meaford hockey club is doing just that.

After accusations of racial slurs being used by Knights players in their home opener game on October 11 against the Wiarton Schooners, the team has pulled together. Both team management and the players insist that no racial slurs were used, but the accusations hit the team hard, and they have rallied around each other as they focus on the game, and only the game.

Team director of marketing, Jason Acres, told The Independent that the Knights are a culturally diverse team, and there is no room for racism on or off the ice. Instead, the team's focus is on practise and training, as well as contributing to the community that supports the team.

“This year we've been part of the Scarecrow parade, we've been at the nursing home, we've been up at Bill's Valu-Mart to collect food for the food bank, we're also doing a bottle drive, and in December we're working with Bayside Chrysler with a teddy bear toss to help people have a good Christmas this year, so we do a lot of stuff in the community,” said Acres. 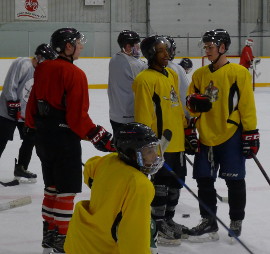 The team itself counts on the community for its success. With 30 players on the team, most many miles from home, roughly a dozen Meaford families open their homes each year as billets, providing players with clean, safe homes to live in during the season. Now in its sixth season, the Knights have also benefited from strong support from sponsors and fans.

“I've been with the team for three years. When I joined the team we had roughly 14 sponsors, and the last couple of years we've had over 50 sponsors. The community support has been amazing,” said Acres. “Each year our sponsors grow and our fan base grows.”

The players too understand the importance of the support of the community in which they play.

Twenty-one-year-old right winger Tyler Arsenault from Brantford told The Independent that his experience with the Knights has been positive.

“They are a great organization, they are always looking out for our best interests,” said Arsenault. “Everyone's on the same page, going for the wins.”

Asked how the accusations made after their home opener impacted the team, Arsenault said that if anything, it brought the team together.

“We always try to keep outside incidents aside, but obviously it had an impact on the team, but I feel like it's brought us closer together as we've tried to portray throughout the room that everybody is equal to everybody. So it hasn't really had a negative, nor a positive impact, we just try to keep it to the back of our heads,” offered Arsenault.

Travis McConnell, a 19-year-old forward from Iowa City, Iowa agrees that the incident brought the team closer together. As an African-American hockey player, McConnell has experienced racism before, but not while playing in Canada he said.

“It didn't really impact the team, but it was disappointing to hear that (the accusations of racial slurs). We've got players on our team from other places, and we've got two African-American players on the team, so I don't think we're a racist team at all,” McConnell explained. “I haven't had any issues yet in Canada, but down in the States there's been racial slurs called out to me numerous times. You learn to get used to that as you get older. We're out there trying to win, and just have fun.”

Callum Queenan, a 21-year-old forward who hails from Newcastle, England, has enjoyed his three years with the Knights.

“I love doing the community stuff,” said Queenan. “If you want fans to come into the rink, you've got to help the community. We go to the nursing home, we go to community dinners and stuff like that, the community is everything, that's how you've got the money to keep the rink open.”

General manager and team coach Nathan Parrish has been with the team from the beginning.

“We've always had a very good fan base. Every year we're probably in the top five for home game crowds,” Parrish said, noting that an average Knights home game sees 250 to 300 fans in the arena. “We (the team) all have the same goal, we love the game, we love coming to the rink. We're a game and a half over 500 right now, so it's been challenging, we've got a younger team, but if we can continue on the road that we've been going on we'll continue to stay above 500.” 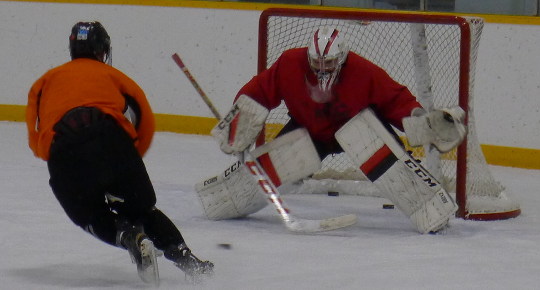