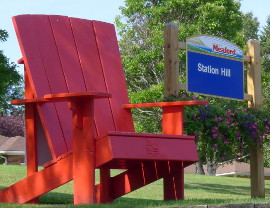 The Big Red Chairs began in spring 2015 when five oversized, bright red Muskoka chairs were built by Georgian Bay Secondary Schools students in the wood shop, and placed at some of the most scenic locations in the municipality.

In 2016 the tour expanded significantly to 10 locations across the community, including local attractions like Grey Roots Museum, Coffin Ridge Winery, and Fox Harley-Davidson, as well as hidden gems and scenic lookouts. Panels were added to the backs of the chairs highlighting local history and other nearby attractions, encouraging visitors to explore all that Meaford has to offer.

“It’s such a great feeling to drive by the Big Red Chairs and see families with all their kids and even the dog together for a family picture,” said Mayor Barb Clumpus. “It’s an honour for the tour to be recognized, as the chairs are quickly becoming part of the scenic landscape of Meaford.”

For more information visit www.meaford.ca/meafordchairs, or pick up a brochure at municipal facilities.