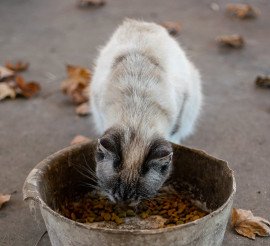 Last week, we shared three secrets that the pet industry doesn’t want you to know:

Now, we’re going to look even further into the industry’s sneaky secrets, starting with rendered meats.

Would you believe me if I told you many of today’s popular pet foods contain euthanized pets as sources of meat? Tying in to the previous point about pet food labelling, we now delve into the dark and disturbing world of rendered meats in pet foods.

When it comes to pet food labelling, manufacturers must list the animal source (chicken, beef, fish, etc.), however there is a miscellaneous set of ingredients called “meat”, “meat meal”, or “meat by-products”. These are the terms that pet food manufacturers use when they make a food containing a combination of indiscriminate meats. These meats can include, but are not limited to: euthanized pets (like dogs, cats, and horses), livestock, zoo animals, roadkill, and pretty much any mammal that was once alive.

In 2018, the FDA issued a recall for Gravy Train, Kibbles ‘N Bits, Ol’ Roy, and Skippy dog food (produced by the J.M. Smucker Company) for containing low levels of pentobarbital. It is stated that any detection of pentobarbital in pet food is a violation of the Federal Food, Drug, and Cosmetic Act.

In the last three years, there have been four major recalls, affecting twenty-seven brands of dog food, for containing pentobarbital.

For any commercial pet food seeking approval from the American Association of Food Control Officials (AAFCO), they must meet certain standards for vitamin and mineral content. The majority of pet foods on the market are highly processed, destroying much of the naturally occurring nutrients found in the ingredients prior to processing. As a result, it is common for pet food manufacturers to add synthetic, manufactured vitamins and minerals back into the food.

There is much debate over whether synthetic vitamins and minerals are safe for pets long-term. While many experts believe there is no risk in adding synthetic nutrients to pet foods, others express concern about the function of cell receptors in the body. Cells contain receptor sites, which are responsible for certain cellular functions. The concern pertains to receptor sites becoming clogged due to synthetic nutrients, which may compromise their biological functions over time.

Another significant concern is the fact that the majority of synthetic vitamins and minerals used in pet foods come from China, where there is virtually no regulation whatsoever.

With all this talk about synthetics in pet food, there is a silver lining. Not all pet foods contain synthetics. There is a small (but growing) number of manufacturers making very high-quality, synthetic-free pet foods. Dry (kibble) brands like Carna4 are made with organic sprouted seeds, one of the most nutrient-dense foods on Earth. Ingredients like sprouted seeds and gentle processing enable brands like Carna4 to make a synthetic-free kibble, and still meet standards for nutritional completeness. Also, raw diets, because they are unprocessed to begin with, are ideal synthetic-free options to consider. Whether frozen, dehydrated, or freeze-dried raw, there are a multitude of synthetic-free raw options for dogs and cats. Consider brands like Smack or ZiwiPeak, for example.

Grain Splitting Is A Thing

In an effort to make their product more alluring to consumers, many pet food manufacturers use a deceptive tactic called grain splitting. Grain splitting is when a manufacturer divides a substantial, often less-desirable ingredient into smaller segments. The purpose of this sneaky trick is to save money on more expensive ingredients (like meat), and to make it appear as if there is more meat in their product, when in actuality, there is not.

For example. If a pet food heavily consists of rice as the first ingredient, many consumers may see this as an indicator of a lower-quality product, and will likely purchase another product. So instead, rice is split into smaller segments, like “rice bran” and “rice flour”. By doing this, rice now becomes two (or more) separate ingredients, and since ingredients are listed in descending order by volume, rice is no longer listed as the primary ingredient. Now, meat becomes the first ingredient on the panel, however the product is still mostly comprised of rice.

Very sneaky, right? Grain splitting can be done with any grain, but most commonly includes wheat, rice, and corn.

Thankfully, there are many excellent quality pet foods on the market that are Canadian-made, and also affordable. Talk to a pet nutrition specialist about your dog’s diet if you have any questions or concerns.

Brandon Forder, known as The Pet Expert, is vice-president of Canadian Pet Connection, an industry leader in healthy pet lifestyles. Brandon holds multiple certifications in pet nutrition, and has more than twenty-five years' experience specializing in pet health and behaviour. He has written hundreds of informative pet-related articles for newspapers, magazines, radio, and the popular Ask the Pet Expert Blog. Brandon is highly skilled in pet problem solving, and enjoys teaching others about smart and responsible pet ownership. To learn more, visit www.CanadianPetConnection.ca.