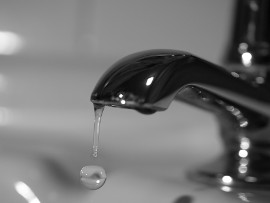 A number of Meaford residents turned out to the November 27 council meeting to show support for a presentation focused on concern about the radio-frequency (RF) water meters being installed in Meaford homes.

In July council approved a plan to replace Meaford's 2,700 aging water meters with Neptune R900 RF water meters at a cost of $823,000. Council was told that the RF meters would allow municipal staff to read all meters in a single morning by simply driving past the homes of municipal water customers, reducing the time required from 540 hours per year to roughly 72. The RF technology that allows for that efficiency is a concern to some residents.

Meaford resident Mike Belec spoke to council on behalf of a community group called 'Meaford Citizens 4 Safe Technology', and he shared the concerns of a number of residents about the safety of RF meters, and the wisdom of adding yet another wireless device into homes already saturated with electromagnetic field-emitting gadgets, from cellular phones to wireless routers. There is growing concern that the increasing exposure to emissions from wireless devices is harmful to our health.

“There's widespread concern about the biological effects of these long-term, low level, constant, ubiquitous exposures being emitted everywhere in our lives,” Belec told council. “We are in fact surrounded by what's called 'RF smog'.”

Belec questioned the wisdom of adding to that RF smog when safer options are available.

“The wireless industry people will tell you that the Neptune R900 device is safer than a cell phone, but what they are unable to tell you is what the safe level is for the R900, and your cell phone, and your wi-fi, and the wi-fi at Tim Hortons, and your cordless phone, and your wireless mouse, and your television remotes, and your GPS or keyless locks and motion detectors, your baby monitor, your microwave oven, cell towers, RF utility meters, Smart meters, iPads, iPods, laptop computers, et cetera. In the real world surrounded by our multiple RF devices and more to come, there's no room to hide,” noted Belec in his presentation to council.

Belec urged council to reconsider the plan approved in July to replace water system users' meters with the RF technology, and to instead explore safer options. He also suggested that while the municipality has expressed a willingness to make accommodation for those with sensitivity to radio frequencies by installing the RF unit outside the home, the criteria for qualification for the alternate installation is unrealistic.

“To their credit, the municipality is providing one safer option by installing the transmitter portion of the device on the outside of the house; unfortunately there are several problems with this,” Belec told council. “First, an external installation might reduce exposure levels, but keep in mind that RF moves through concrete and could still emit radiation into the house. Second, this safer option is available only to those with electromagnetic hyper-sensitivity to RF, the rest of us get the less safe option. Also, qualified residents must get rid of all wireless devices in their homes, and they must assume liability for any damages to the Neptune R900.”

Belec's presentation to council was followed by applause from the gallery.

Councillor Jaden Calvert was the only member of council to speak to the issue. He told council that as someone with sensitivities to RF emissions he shares the concerns expressed by residents, but he also said that sometimes choices need to be made.

Calvert said that he would like to see more research done on the issue, and he would also like to see continuing dialogue at the local and national levels to help raise awareness about electromagnetic frequencies and how exposures can be managed and reduced.

Municipal staff told council that they are preparing a report that will be brought before council at their next meeting.